David Jesse Holt was born in South Lake Tahoe, California in the United States of America on 9th of June 1960. David’s grandparents were originally of German descent and they still spoke German in the family.

David started taking classes in Ninjutsu (in the later years renamed to “Budo Taijutsu” by Dr. Masaaki Hatsumi) in the Shadows of Iga Ninja Society (SINS) led by Stephen K Hayes. Dave took his first class on 14th of February 1975. It was by accident that David found the flyer of Shadows of Iga Society school as he was having a walk. Ninjutsu classes were held in the state of Ohio, over 3000 km away from David’s home in one direction, therefore it took great effort for David to visit the classes and he took the teachings especially seriously.

In the meantime David was leading a career of professional guitar musician and was professionally playing ice hockey in a team. It was during this time that Dave’s girlfriend was accidentally killed by a drunken truck driver. This made Dave fully refuse his career as a professional musician, due to the alcohol and everything that came with it (however later in 2009 David got back to intensively composing and playing music and has recorded over 200 studio albums).

In the next 10 years following 1975 David has advanced to Shidoshi rank in the SINS and has been travelling to Japan to learn from Dr. Hatsumi in the Hombu Dojo. Eventually the Shadows of Iga Ninja Society has been dissolved and David chose to follow Dr. Hatsumi through attending numerous Bujinkan seminars and travelling to Japan at least once per year.

David Holt moved to Hungary in year 1994 and settled in Gyongyos, a couple of years after meeting his future Hungarian wife, who studied in the US. Later David moved to Budapest. Throughout this time David continued training and made friends with different martial artists, who eventually asked him to teach a class of Ninjutsu. David held his first open class in Budapest at Fővárosi Művelődési Ház (FMH) on 5th of October 1999. After this class many said that Dave's dojo is not going to last more than one month, but quite the opposite happened: David had been holding trainings almost every week until his passing away in the last days 2014. This is the longest ever time a foreigner in Hungary has managed to keep a Dojo going.

At the Taikai in Norway accompanied by motto “East Meets West at the Gateway” in 2002 David was asked to join Bujinkan, which he did. David was offered to start from a higher rank due to his many years of training, but he has made a choice to start from 0 to make it clean and fair. By year 2010 David has acquired the Bujinkan rank of Shihan, a “master instructor” in Japanese. Until he joined Bujinkan, David has been teaching under his own system of ANITA (American Ninjutsu Iaido Training Association) with a ranking and testing system almost identical to that of SINS. Afterwards joining Bujinkan David’s Dojo was entitled Ginrei Dojo, meaning “Silver Topped Mountain”. In the later years words “Arashi Tennin” were added to the name, which meant “Thunder” and “Heavenly unseen way”.

The annual summer camp in 2002 was attended by over 150 people. At that point this has been by far the biggest Dojo in Hungary and this record has not been beaten by anyone until this day. In 2003 David Holt hosted the first biggest ninja seminar in Hungary held by Edward Martin, also known as Papasan - 15th dan Bujinkan Shihan.

In 2006, Butokugan martial arts centre opened in Budapest and David was the first person contacted by Butokugan leaders to teach Budo Taijutsu. Ginrei Dojo has been holding trainings in Butokugan every week until the centre closed down.

Last years of David’s life were accompanied by unfortunate passing away of his mother in 2010 and divorce initiated by his wife in 2011. In the coming years David’s health has considerably worsened, but he never gave up and kept on holding trainings and writing music until he suddenly passed away in 2014 in an unfortunate period between Christmas and New Year, when nobody was around him to help.

Through his life David has always helped people around him to be happier, learn how to protect themselves in any situation and to improve their lives. David always took big care of his students and many are grateful to his countless contribution to spreading of the art of Budo Taijusu as taught by Dr. Massaki Hatsumi and doing his best to teach us at every single training. 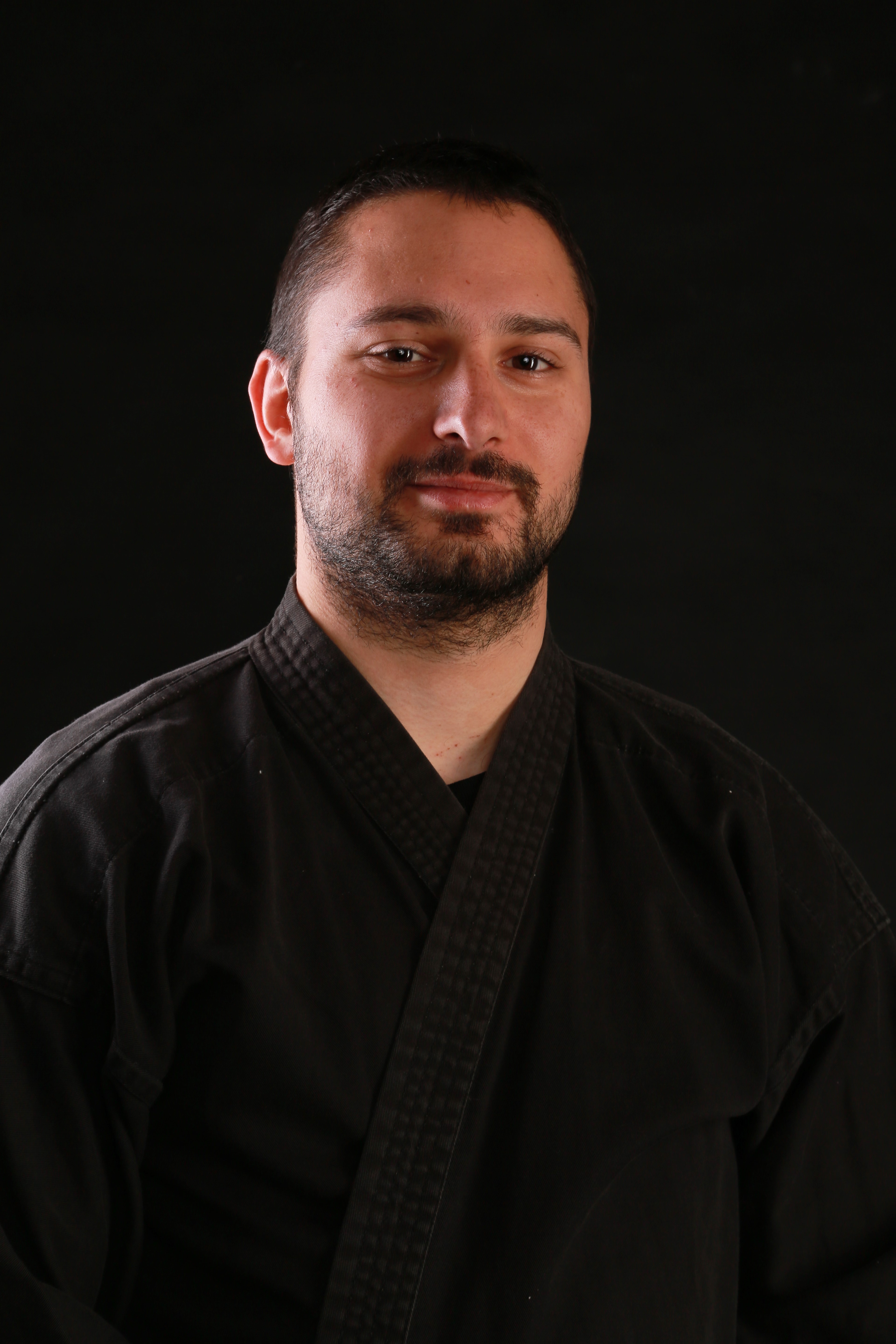 He was born in 1990 in Budapest. In his childhood the bigger guys bullied him a lot because of his small size and glasses. At the same time he was a big fan of the Hong Kong action movies. He was enthusiasted by the movie „Drunken master”, (in Hungarian „Részeges karatemester”) so he started to take karate lessons. In 2005 he moved to Slovakia, Pozsony (Bratislava) with his family and after a while he started to feel that Karate is not ’his art’. At that time, the difficulties of the high school years and the little opportunities given by the stranger country lead him to study Wing Tchun Kung Fu. During the weeks taking the final exam he had to make his choice where to continue his studies. Even as a child he was dreaming about having an own dojo teaching martial arts, but until life didn’t force him to make that decision, that dream was forgotten until that moment.

In the summer of 2010 he moved back to Budapest to start his studies at the University of Physical Education (at that time it was called Semmelweis University of Physical Education and Sport Science) faculty of P.E. Instructor and Coach. At the same time he started his Shaolin Kung Fu and Ninjutsu studies and until this day he practices both arts. The years before he knew something about the ninjas, but that was only superficial knowledge, like the „shadow warriors” and „professional spies”. He wanted to learn from an authentic source to absorb his knowledge. After visiting a few dojos he chose David Holt’s dojo. He felt from that hour and a half-talking while paying attention to the training, that how much knowledge and experience is owned by the master, together with the quantity of patience and the love and effort he gives to his students teaching the art of Ninjutsu.

Since then he continously attends on the traninings and helps the dojo. In September 2014 with the permission and recommendation of Dave he takes a trip to Japan to learn and take a test from Dr. Hatsumi Masaake  and the other Japanese shihans. At that time he successed to take the 5th dan test, he achieved the Shidoshi rank, he entered the Shidoshi-kai, and he could get his license to start teaching. In the same year the master has passed away, the dojo was permanently closed, he helped Dave’s family with his teammates.

At February 2015 he was the only one, who had an official teacher’s license from Japan, and his teammates knew that he was dedicated to do sports and hold trainings, so making the agreement he was elected as the official teacher of the Ginrei Arashi Tennin Dojo. Since then he continously holds the trainings with his remained teammates and attends on other teachers’s seminars in Hungary and abroad.

After Dave's death Jorgosz invited every year to Budapest Ed Martin (Papasan) who was born in 1934. He was the mentor and leader of the dojo. In May 2017 he gave the 6th dan to Jorgosz at his last visit. At 13th July Papasan has passed away in the age of 82.

In Dec 2017 Jorgosz wanted to go more serious in Ninjutsu and after the Ginrei Dojo has fallen apart, it exists only in memories, every black belt student has opened an own dojo. At that time Bujinkan Budapest was initiated which is led by him only.

2014. february – the official instructor and teacher of the Ginrei Arashi Tennin Dojo in Hungary